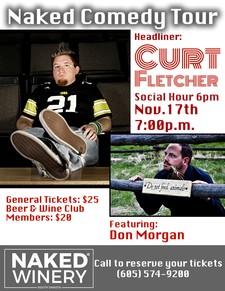 Get your tickets soon. Don't miss out this comedy show

In Stock
Be the first to review this item »
Tweet
Email

Curt Fletcher has appeared at some of the biggest clubs in the country with some of the biggest names in comedy, including Jim Norton, Kyle Kinane, Harland Williams, Josh Blue, Chris Porter, Theo Von, Jackie Kashian, Finesse Mitchell and Brian Posehn. He advanced to the semifinals of the HBO Lucky 21 competition. He has also been selected for the World Series of Comedy and the Laughing Skull Festival.

Curt made his television debut in 2010 on the late night talk show, The After After Party, hosted by Breaking Bad's Steven Michael Quezada. He also appeared on The Morning Brew with Friends. Fletcher co-wrote The Consequences of a Feeble Mind, which was selected as a finalist in the Write Movies International Screenplay Contest, and the StoryPros Screenplay Contest. In 2014, Curt was a writer for the AVN Awards on Showtime.

Don Morgan is a rising star, up and comer, freshest face on the scene and any other cliche you can come up with to say he is funny but no one knows who he is.

Don's ability to offend you while making you laugh is a great mix. His views on relationships, online dating, in particular, will change your views on dating and his stories about his daughter are a blast.

He's definitely not a shock comic, Don is too clever for that, but you will probably get fired if you hire him for your corporate event.

How does Don get away with it all? He doesn't know, but as long as he does, he will keep doing it.

Your membership guarantees you will receive hand-selected Naked wines quarterly. It also gives you discounts on wine and products you buy in our tasting room, on our website, and at wine shows.

Get your tickets in advance for great savings. For further savings buy a Season Ticket.